For a long time, a short road out of my development was closed. No traffic in or out. It led to the main road...like, where restaurants, stores, and other essential destinations were located.

Here's a diagram to show you what I mean... 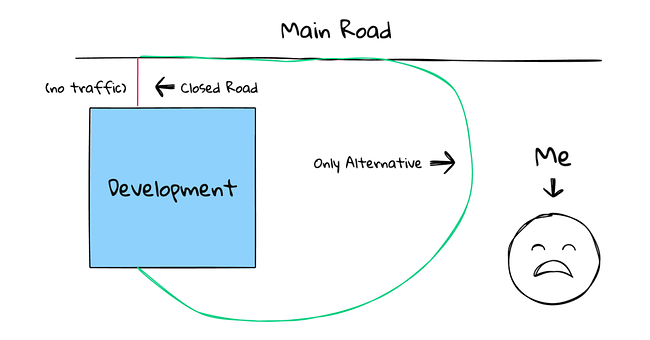 If the road were open, it would save at least 5 minutes and a couple red lights.

I called the town hall a couple times to find out what the deal was.

The board has to evaluate how opening this road is going to influence traffic. They may make a decision in the next few months.

There was no traffic on this road...there wasn't even a crossroad for traffic to be had.

About a year later, the road finally opened. We were notified by email that the road was opened, and that "the situation would be heavily monitored in the weeks ahead."

There were no issues. Everything was fine. So fine, that it made me want to ask the town to pay me back some gas money.

A lot of rules are silly. And the bureaucracy often comes first. Before good old-fashioned common sense and listening to people.

A simple acknowledging of this can help make sense of what can be a really nonsensical world sometimes.

For parents, students, and anyone else who believes that music can and should be a meaningful part of everyone's life.

I am the founder and director of the South Shore Piano School, and I have been teaching the piano for nearly 20 years. My work centers around bringing music to the lives of kids, parents, and adults in an enriching, meaningful way. At the South Shore Piano School, my incredible colleagues and I accomplish this through skill-based teaching, community, and an innovative, people-first business model. You can read more about me here.

Heading in the Wrong Direction

Heading in the Wrong Direction

Please log in again. The login page will open in a new tab. After logging in you can close it and return to this page.